The Other Greece… A spiritual return to my village

I was twenty eight years old the first time I visited Greece as an adult. I had been twice before. The first time, my mother, who was born in Thessaloniki, and I visited my grandfather- I was three years old, and it was 1975. Greece in the 70s was a very different place than now- before the Euro, before the global reach of the internet- you could still touch the columns at the Parthenon, or sit inside of a large, 2,000 year old amphora vase around the base of the acropolis. The second time, I was seven years old, a trip that provided more memories of Greece but did not lend itself to the full appreciation I got in 2001, when my mother, her husband, my boyfriend, and I made the long-awaited journey from Baltimore, Maryland, back to the motherland. This trip came after having studied the Greek language as a graduate student (we didn’t speak it at home while I was growing up,) and having taken an interest in Hellenic culture and in my own roots as a Greek-American.

That summer, I visited family in Piraeus, saw the impressive monasteries at Meteora, swam in the warm waters of the islands, and even made a pilgrimage to see the place where my mother spent her first ten years, before immigrating to the United States. She grew up in a house next to Twelve Apostles, the historic Byzantine church in Vardari, Thessaloniki. My mother showed me the places where she and her sister used to play in the church doorways as children, the bullet holes still visible in the frescoes on the church’s interior walls leftover from the war, and where the old house stood, now replaced by a modern apartment building. The Thessaloniki journey ended with a highly-anticipated visit to see the place where my grandmother, Ourania, was buried at the local cemetery (Agia Paraskevi). My yiayia had died of cancer at the early age of thirty three, so I never knew her and had only heard the romantic stories about her relationship with my grandfather, Costas. Because he was so astounded by my grandmother’s beauty, he reportedly told the bride’s penniless family, “I don’t want any prika from you- all I want is to marry your daughter, and a rolling pin so that she can make pites.” I had sentimental ideas that visiting her grave would result in some kind of communication between the living and the dead; as if seeing her returning daughters after forty years, and her granddaughter for the first time would manifest itself in some kind of “sign” – a chirping bird, I thought, who would pay us a visit as we stood by the grave. I looked and looked, but no bird ever showed up to pay us a visit. But, after finding a broom and sweeping the leaves and debris from the neglected family plot, a wet pattern emerged on the marble, to our amazement, in the perfect shape of a heart! My yiayia knew I was there, and was letting me know in her own special way. 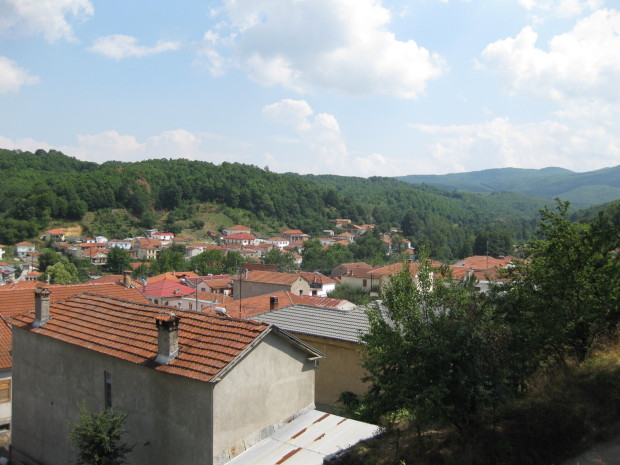 Since that trip, I have been back to Greece almost every summer. I even took an intellectual interest in Greek history and completed a doctoral degree based around making a documentary film about the life and times of Laskarina Bouboulina, the heroine of the Greek War of Independence. Over the last nine years I have also made it back to Thessaloniki many times to learn more about my personal history and maternal heritage. But my most memorable experience was in 2009, when I finally went to my grandmother’s xorio (village).

For many Greeks of the diaspora, going back to the family village is a very meaningful return- a nostos. For me, visiting Greece is always a mixture of feeling profoundly connected to a place and the people, while at the same time, seeing things through nascent eyes, like a tourist. But visiting my yiayia’s xorio in Flambouro last year allowed me to see a Greece that I had never imagined. Flambouro is located in the Florina prefecture, in northern Greece, about eighteen kilometers from the F.Y.R.O.M. border. It has a population of 500 people. Needless to say, our presence was quickly noted by the locals. As I walked around the village, I noticed one church, one school, one store, no hospital. If you were to get sick, the only thing to do I joked, would be to pray. No wonder we Greeks are such religious people.Up there in the mountains of northwestern Macedonia, things were different. It rained and it was cold. A rooster sang at five a.m. every morning under my window. I walked. Alot. The bathroom was outside of the house. Hot water was only available at certain times of the day. When the sun set, there was nothing to do but talk. The pace of the day was set by the bookends of sunrise and sunset. It was more like camping than vacationing in the sun-drenched version of Greece you see in tourist magazines. Instead of beaches, I was surrounded by snow-capped mountains; in the place of sea-side cafes, our dinner selections came from the garden and the chicken coup; I expected to see goats, but not hear stories about the black bears that come down from the mountain into the village to forage for food; instead of bikinis, we wore wool sweaters and put itchy flokates on our beds for the cool Flambouro nights. All of this in August, when Athens was experiencing 100 degree days and fighting some of the worst forest fires in recent history. 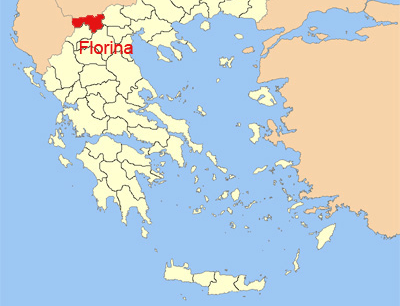 The journey began in Thessaloniki with my aunt Stavroula driving us four ladies (me, my mother, my aunt Eleni, and herself) in a tiny Volkswagen Golf, stuffed to the ceiling with boxes of sweets only available in the big city, and bags full of hand-me-down sweaters and jackets for the relatives up in the mountains. We Americans contributed with our over-packed suitcases, iPods, and Nike running shoes. Stavroula’s driving was not unlike the taxi drivers’ in Athens, so I closed my eyes and imagined it was the Greece of 1950 that my mother had experienced. It was fascinating to drive on the newly-built superhighway, with its twenty tunnels leading up to Flambouro, and imagine what the trek must have been like for my mother, aunt, and grandmother when the road was a dangerous, one lane journey around, rather than through, each precipice.

Family members, who names I’d never heard, greeted us with tears and plates full of fresh foods- my aunt Christanthi made delectable youvarlakia, pites, fasoulakia. We were paraded around to all the houses where wonderful, loving relatives filled us with food, drink, and stories. These were hearty people in a physical sense, but also in spirit. The remoteness of the village had insulated them from the jaded, harsh city life and it was a refreshing innocence that made it feel like I had gone back in time to a kinder, simpler way of life. This way of life seemed to be more concerned with the basics of human survival (that not only included things like food and shelter, but also love and conversation) than the accumulation of things, as a measure of success. This slower pace must also allow the imagination to thrive. I’ll never forget my eighty year old aunt, Marianthi reciting explicit jokes such as this: A man starts complaining to his wife about his low prika, to which the wife responds, “What do you mean, you ungrateful son-of-a-bitch? You got two hotels (pointing to her breasts), a garage (her back side), and a color t.v. (between her legs) What did I get? (Pointing to his groin)- an antenna that sometimes works (pointing up), and sometimes doesn’t!” Who needs “Sex in the City” when you’ve got this as nighttime entertainment?

The most amazing encounter was that evening as we strolled around the village. A woman leaned out of her window to ask if we were the “Broikos” girls (our family name). She proceeded to tell us that she knew it must be us because we looked just like my grandmother, who was the most beautiful woman in the village. My yiayia’s tragic memory was alive in this place- strangers recited stories of how young men used to follow her around and try to get her attention. When we stopped at the “bar” for a drink before returning home, the owner immediately remarked that we were Broikos- he could tell by our faces. I was amazed at how alive our history was in this small place, written on our faces. Later that night, my grandmother visited me in a dream for the first time since she showed me her heart in Thessaloniki many years before. It was a magical touching o 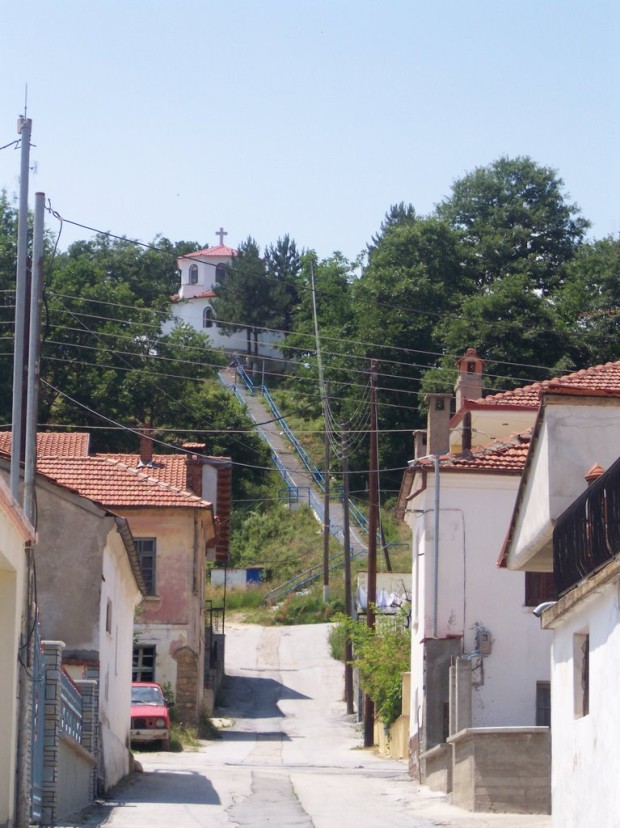 Flambouro was not a “happening” summer vacation destination, but it was a life-altering journey to the center of my spirit. Flying back to Baltimore on the plane, I made sure to jot down a family tree based on the information that I had gathered in the village. Now, when I think about Greece on cold Baltimore nights in the winter, I don’t only remember sunbathing on the beaches and dining dockside on the islands. I hear the laughter of my family and Marianthi’s dirty jokes. I remember the special moments in the xorio, and cherish the memories of the “other” Greece that few people get to see.